The Premiere League has started. I am a fan of soccer (I’m in the US, so I’ll stick with soccer), but not an ardent follower of the leagues. My sports hierarchy is Basketball, most combat sports, then everything else. Soccer is pretty much the top of the “everything else”, but my excitement rises during the cups code — country versus country. 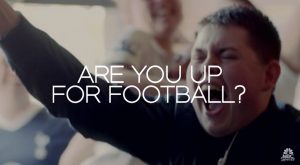 Here in the US, the matches are a bit early in the morning. And NBC has been playing promos for a while to build excitement. Their slogan is “Are You Up…For Football?” As you’ll see from this video clip, it kicks off with images of eggs cooking and beer pouring.

I say yes. For me, watching soccer and drinking beer are a perfect match. I am not entirely sure how that came to be, but I don’t think I’ve seen a match in years — outside of the office — when I wasn’t having a beer. The only other sport I can say that about is watching baseball in person, where I am certain I’ve had a beer at every game I’ve seen since I was 21. Jay probably finds this ridiculous, but I can only tolerate watching baseball if I get a little buzzed. For soccer, I just feel like I’m not really fully experiencing it without beer in my belly. I honestly cannot explain it.

I did have some breakfast beer drinking last World Cup. I will definitely have more for Russia. Even Euro Cup. So let’s start planning where to have a pint and watch those matches.

2 thoughts on “Premier League and a Pint”