Beer has its food pairings. I won’t pretend I can relay those pairings with confidence nor expertise for meals or main dishes. Snacks, however, I think we’re all experts at. Salty chips or nuts are good. I like carrot sticks and think they’re good to cleanse the palate a bit for more beer. Of course, breads and other spongy carbs are good to give that sense of absorbing some of that alcohol. And then there’s cheese. It’s good with pretzels, the big, doughy kind or the bag of salted, crunchy sticks. Even by itself off the block, it’s a good side snack to go along with a beer.

I am thankful beer cheese exists. Many people are. The verisimilitude (and Wikipedia page) of its regional origins is Kentucky, with some recipes even touting local tastes down to Louisville. But recipes reflect a global influence from Australia to obvious Scandinavian fondue influences. It’s a way to put flat beer to use besides just drinking it anyway. I like recipes like that, as I have several that use old baguettes or broccoli and cauliflower that is wilting a bit. So I decided to give beer cheese a go.

There are many recipes out there. I will not list any here to not show a preference, plus they all differ wildly, from fresh onions and serve immediately to liquid smoke and overnight cold storage, not to mention quantities of ingredients. So I freestyled off of a two. I picked one recipe that didn’t use worcestershire sauce, as I’m hoping Jason will try some as well, but I substituted the Pale Lager on that recipe with a Brown Ale (because I had brown ale) and preferred corn starch and fresh garlic. 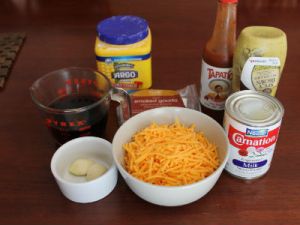 Here’s the lineup. I made more of a half-batch than most recipes and the cheese base I used was sharp cheddar and gouda at about 5-to-1. I also used Tapatio sauce instead of Tabasco, again, because that’s what I had. 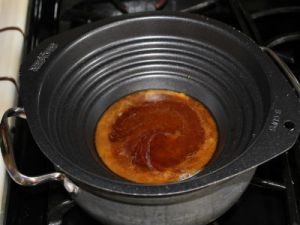 None of the recipes mentioned a double boiler, but to me it made sense to not have too much charred cheese crust. Beer and condiments first, and I think this would probably be better with a finer mustard than I had. 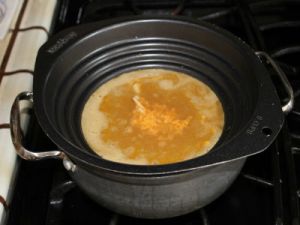 Cheese next, added to two half batches, and the smell of warm beer and melted cheese is curious and intoxicating. The look of it, however, is not. The cornstarch was added at this step but maybe I should have saved some of the beer to pre-mix/dissolve. 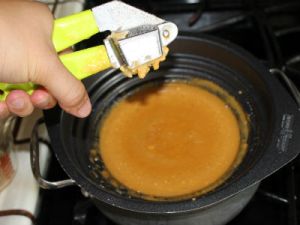 Fifteen minutes in and the cheese is still fairly chucky. The color has become consistent and viscosity is low. Twenty minutes is time for garlic, which was too much of a chore for one-hand on press and one on camera, so only this staged shot.

And here they go into storage. It smells good and I did sneak a small taste, which I hope is a little better as it cools and solidifies. It was a little bitter and a bit like the bottom-of-the-dish part of nacho cheese, but was happy to give it a try.