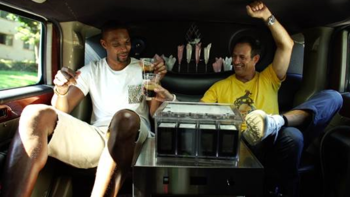 Basketball season has started. And I’m eating it all up. From Dirk and the Mavs fighting the good fight to why the Clippers deserve to be hated (great compilation story), the NBA has it’s share of characters on the court and at the keyboards.

Yesterday, I found some interesting basketball news pertinent to the 2.5 people that read this. Chris Bosh beer is available today thanks to Dogfish Head, and of course, Chris Bosh and his love of beer. He’ll be highlighted on a new web series called That’s Odd, Let’s Drink It with someone named Chris Calagione (sarcasm, people). Dogfish is responsible for too many awesome things to cover in one post, but this is just another to add to that list. As you’ll see from the article, Bosh brews at home and wanted to reach out to someone that was a guru but is amicable enough to respond as a peer. (It probably helps a little that Bosh is a star athlete to merit this kind of response) And over the course of the budding relationship, a smokey stout was born.

Dogfish has many guest beers. In many ways, it is a sound marketing move for them. For Bosh, I also believe this to be a great marketing move. As we all know, beer fanatics are likely to embrace him for going to Calagione and not someone like Keith Villa. I was a fan of Bosh before, and am now even more of one. I just wish I had a trip to Delaware planned. And I’ll definitely be on the lookout for more Bosh recommendations, or even a future line of his own. Still, I’ll be happy with guest brews.

If you haven’t browsed the site, First We Feast, it’s a good spot that I’ve highlighted on our Twitter feed when DJ Quik was on a segment. As for the future episodes of Calagione’s show, let’s see Mac Miller top the infamous NBA Photobomber.

And since we’re talking basketball…Go Warriors!!!