The San Francisco Winter Fancy Food show was last week and one of the exhibitors that has been getting a lot of press is ReGrained. It is a great story of reclaiming/upcycling/whatever “spent” grain from the beer making process and making a nutritional bar out of it. There are many ways you can go with this product. Great use of ingredients with nutrition still in it that may be wasted. The millennials trend that food needs to be immediate in accessibility to all its benefits in an easily disposed of wrapper with little energy invested in preparation. Additional food for the masses that’s sustainable. They went with all of that and the link to the fact that craft beer is very popular and why not get that flavor in as many things you consume as possible. And I’m not saying there’s anything wrong with that, but I’m saying I’m alright craving a beer and snack and having a beer with my snack instead of combining them. 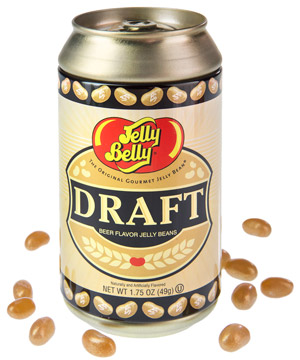 A couple years ago, while taking my kids on another awesome tour of the Jelly Belly Factory (go on a weekday when the machines are running), I came across beer flavor jelly beans. I’m not even entirely sure if they can be called beer flavored jelly beans because I don’t know if they use actual beer to make it. My first thought was to try it, as I have with soap, lawn clippings, sweaty socks, dead fish and others. My second thought was to get some for family, especially Jason, which I did. And after having some, my reaction was how I’d never want to eat more than a small handful of them. I will say that’s my reaction to most candy, which I can rarely eat in large quantities at a time.

On the candy front, I’ve also had beer flavor peanut brittle. I’m already not the biggest fan of peanut brittle so I’m guessing you know my reaction there.

Chips, however, I can get through a full size bag in one sitting if I really tried. And when I had beer flavor kettle chips (I don’t remember the brand), I was largely unimpressed. I prefer onion or cheese. But I often do enjoy having whatever flavor chips I’m eating with a beer. That’s where I want my beer flavor to come from, the beer I’m having to wash down those chips. Even contemplating the pairing of beer with the wild experimental flavor chips I often eat, like a recent foray into Cricket Chips. I wanna say it was Chirps, let’s go with that.

That’s where I am with ReGrained bars. I’ve yet to have them. I’m more than willing to and eager to see if they really can get that IPA or stout flavor to it. And if that’s from the used grains themselves or from other flavor sources. I’m trying not to think of it only as a novelty or a way to milk more money out of the craft beer boom. I’m hoping it’s a very delicious product that I can eat while commuting to work and not have highway patrol pull me over and ask why my breath smells of beer and not believing me when I reach for the crumpled wrapper. I’m willing to try a few bars and reserve judgment as I hope you are too. Though I know I’m already the foodie skeptic here, especially since I border on the blasphemous in San Francisco with not being a fan of Secret Breakfast.